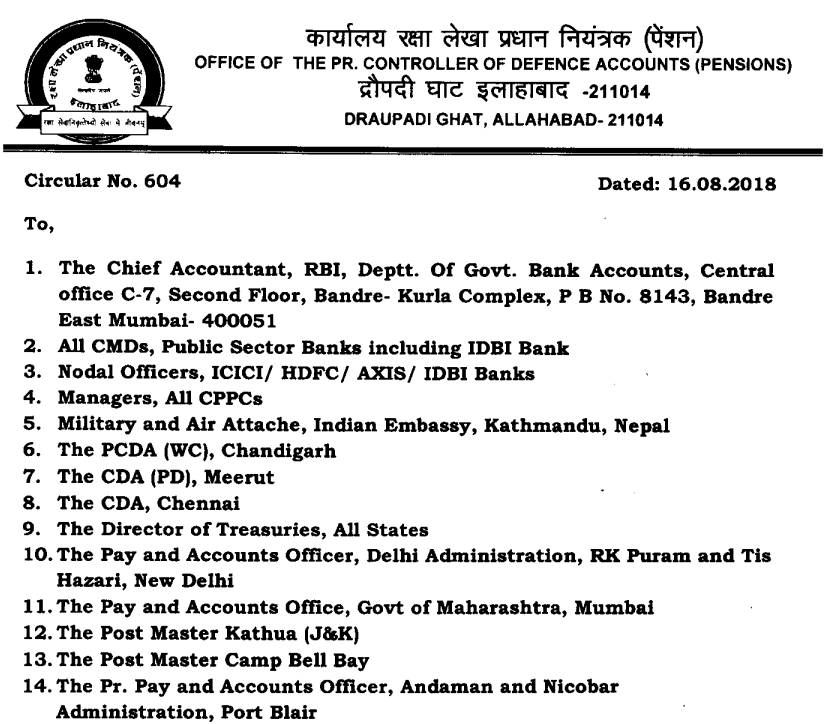 OFFICE OF THE PR.CONTROLLER OF DEFENCE ACCOUNTS (PENSIONS)

There are several representations from various War Veteran Associations demanding the benefit of Maximum of Term of Engagement in OROP as well as in 7th CPC revision quoting the Para-3 of Circular No. 569 dated 19.10.2016. Thus, it appears that there are some misinterpretation/confusion about Para-3 of Circular No. 569 dated 19.10.2016, which needs to be clarified in this regard.

Earlier vide Annexure No.-II of MoD letter No. 200847/Pen-C/71 dated 24.02.1972, there was a provision that Service Element of War Injury Pension will be equal in amount to the normal retiring pension of the rank held at the time of disablement for maximum service of rank. It means Service Element of War Injury Pension was admisssible for maximum term of engagement subject to restriction that War Injury Pension should not be more than last pay drawn. Prior to 6th CPC the Service Element/Service Pension was given 50% of the reckonable emoluments for 33 years of Qualifying Service including weightage, and for lesser period it was proportionately reduced. It is pertinent to mention that after evolution of 6th CPC provision concept of pro-rata reduction has been dispensed with. As per 6th CPC orders pension will be 50% of the last pay drawn irrespective of Qualifying Service. Therefore, relevance of Maximum Term of Engagement becomes obsolete.

The minimum guaranteed pension after implementation of 6th Central Pay Commission, was initially determined on the basis of minimum of the Pay in Pay Band plus Grade Pay vide MoD letter dated 11.11.2008 (Circular No. 397 of this office). This was further modified with issue of MoD letter No. 1(04)/2015/(1)-D(Pen/Pol) dated 03.09.2015 for revision of Service Pension/Service Element in respect of pre-2006 Commissioned Officers/JCOs/ORs pensioners on the basis of minimum of fitment tables, and accordingly Circular No. 547 and 548 has been issued for PBORs and Commissioned Officers respectively. The ibid minimum guaranteed pension was calculated as 50% of minimum of fitment table for 33 years of Qualifying Service including weightage with pro-rata reduction for lesser period.

The minimum guaranteed disability element/war injury element was not covered in the ibid MoD letter dated 03.09.2015. Therefore, MoD letter No. 16(01)/2014/D(Pen/Pol) dated 18.05.2016 was issued (Circular No. 560) for revision of Casulaty Pensionary awards in respect of Pre-2006 Armed Forces Officers and JCO/ORs Pensioners/Family Pensioners, which provides for minimum guaranteed Disability Element/War Injury Element. The clause of pension upto Maximum Term of Engagement in case of War Disabled Pensioners which was admissible prior to 6th CPC was omitted in both the above circulars of minimum guaranteed pension. Therefore, there was a need to clarify this issue and hence the Para-3 has been inserted in Circular No. 569 dated 19.10.2016. After issue of GOI MoD letter No. 1(2)/2016-D(Pen/Pol) dated 30.09.2016 for delinking of qualifying service of 33 years for revision of pension under minimum guaranteed pension, Para No. 3 of Circular No. 569 has become reduntant and therefore this Para-3 may be treated as deleted.

After implementation of 6th CPC and subsequently also in 7th CPC, pension will be determined on the basis of 50% of last pay drawn irrespective of Qualifying Service, so the relevance of pro-rata reduction for lesser qualifying service become reduntant as full pension is admissible for each qualifying service in each rank. Therefore, pension upto term of engagement has also become reduntant. Further, the pension as per OROP rates was based on the live data of 2013 retirees where pension was given as per 6th CPC provisions. Therefore, the demand of pension upto term of engagement has also become obsolete.

Therefore, it is requested y that the issue may be dealt with accordingly and the pensioner approaching for this may be clarified on similar lines duly stating that pension upto term of engagement in case of war disabled pensioners in OROP as well as 7th CPC revision is irrelevant.

7. This circular has been uploaded on official website of this office www.pcdapension.nic.in.