Government employees should know these rules before provident fund withdrawal

AvoAny sum withdrawn by a subscriber at any one time for one or more of the purposes specified in Rule 15 from the amount standing to his credit in the Fund shall not ordinarily exceed one-half of such amount or six months’ pay, whichever is less.

Provided that in no case the maximum amount of withdrawal for purposes specified in Clause (B) of sub-rule (1) of Rule 15 shall exceed the maximum limit prescribed from time to time under Rules 2 (a) and 3 (b) of the Scheme of the Ministry of Works and Housing for the grant of advances for house-building purposes:

Provided further that in the case of a subscriber who has availed himself of an advance under the Scheme of the Ministry of Works and Housing for the grant of advances for house-building purposes, or has been allowed any assistance in this regard from any other Government source, the sum withdrawn under this sub-rule together with the amount of advance taken under the aforesaid Scheme or the assistance taken from any other Government source shall not exceed the maximum limit prescribed from time to time under Rules 2 (a) and 3 (b) of the aforesaid Scheme:

[Provided further that the withdrawal admissible under Rule 15 (1) (C) shall not exceed 90% of the amount standing to the credit of the subscriber in the fund.]

[NOTE l.–A withdrawal to a subscriber under sub-clause (a) of Clause (A) of sub-rule

(1) of Rule 15, may be permitted annually so long as the concerned child of the subscriber continues to pursue the course.]

NOTE 2.-1n cases where a subscriber has to pay in instalments for a site or a house or 11at purchased, or a house or flat constructed through the Delhi Development Authority or a State Housing Board, a House Building Co-operative Society, he shall be permitted to make a withdrawal as and when he is called upon to make a payment in any instalment. Every such payment shall be treated as a payment for a separate purpose for the purposes of sub-rule (1) of Rule 16.

NOTE 3.- In case the sanctioning authority is satisfied that the amount standing to the credit of a subscriber in the Fund is insufficient and he is unable to meet his requirements otherwise than by withdrawal, the amount already withdrawn by the subscriber from the Fund to finance any insurance policy or policies under rule 17, may be taken into account as an
addition to the actual amount standing to his credit in the Fund for the purpose of the limit laid down in this sub-rule. After the amount of withdrawal admissible has been so determined-

(ii) if the amount so determined does not exceed the amount already withdrawn from the Fund to finance any insurance policy or policies under rule 17, the amount so withdrawn may, irrespective of the limit specified in sub-rule (1), be treated as final withdrawal.

(2) A subscriber who has been permitted to withdraw money from the Fund under Rule 15 shall satisfy the sanctioning authority within a reasonable period as may be specified by that authority that the money has been utilized for the purpose for which it was withdrawn, and if he fails to do so, the whole of the sum so withdrawn or so much thereof as has not been applied for the purpose for which it was withdrawn shall forthwith be repaid in one lump sum by the subscriber to the Fund and in default of such payment, it shall be ordered by the sanctioning authority to be recovered from his emoluments either in a lump sum or in such number of monthly instalments, as may be determined by the President.

Provided that, before repayment of a withdrawal is enforced under this sub-rule, the subscriber shall be given an opportunity to explain in writing and within fifteen days of the receipt of the communication why the repayment shall not be enforced; and if the sanctioning authority is not satisfied with the explanation or no explanation is submitted by the subscriber within the said period of fifteen days, the sanctioning authority shall enforce the repayment in the manner prescribed in this subrule.

(3) (a) A subscriber who has been permitted under sub-clause (a), sub-clause (b) or sub-clause (c) of Clause (B) of sub-rule (1) of Rule 15 to withdraw money from the amount standing to his credit in the Fund, shall not part with the possession of the house built or acquired or house-site purchased with the money so withdrawn, whether by way of sale, mortgage (other than mortgage to the President), gift, exchange or otherwise, without the previous permission of the President:

Provided that such permission shall not be necessary for-

(i) the house or house-site being leased for any term not exceeding three
years, or
(ii) its being mortgaged in favour of a Housing Board, *Nationalized Banks, the Life Insurance Corporation or any other Corporation owned or controlled by the Central Government which advances, loans for the construction of a new house or for making additions or alteration to an existing house.

(b) The subscriber shall submit a declaration not later than the 31st day of
December of every year as to whether the house or the house-site, as the case may be, continues to be in his possession or has been mortgaged, otherwise transferred or let out as aforesaid and shall, if so required, produce before the sanctioning authority on or before the date specified by that authority in that behalf, the original sale, mortgage or lease deed and also the documents on which his title to the property is based.

(c) If, at any time before his retirement, the subscriber parts with the possession of the house or house-site without obtaining the previous permission of the President, he shall forthwith repay the sum so withdrawn by him in a lump sum to the Fund, and in default of such repayment, the sanctioning authority shall, after giving the subscriber a reasonable opportunity of making a representation in the matter, cause the said sum to be recovered from the emoluments of the subscriber either in a lump sum or in such number of monthly instalments, as may be determined by it.

NOTE.- A subscriber who has taken loan from Government in lieu thereof mortgaged the house or house-site to the Government shall be required to furnish the declaration to the following effect, namely:-

“I do hereby certify that the house or house-site for the construction of which or for the acquisition of which I have taken a final withdrawal from the Provident Fund continues to be in my possession but stands mortgaged to Government.” 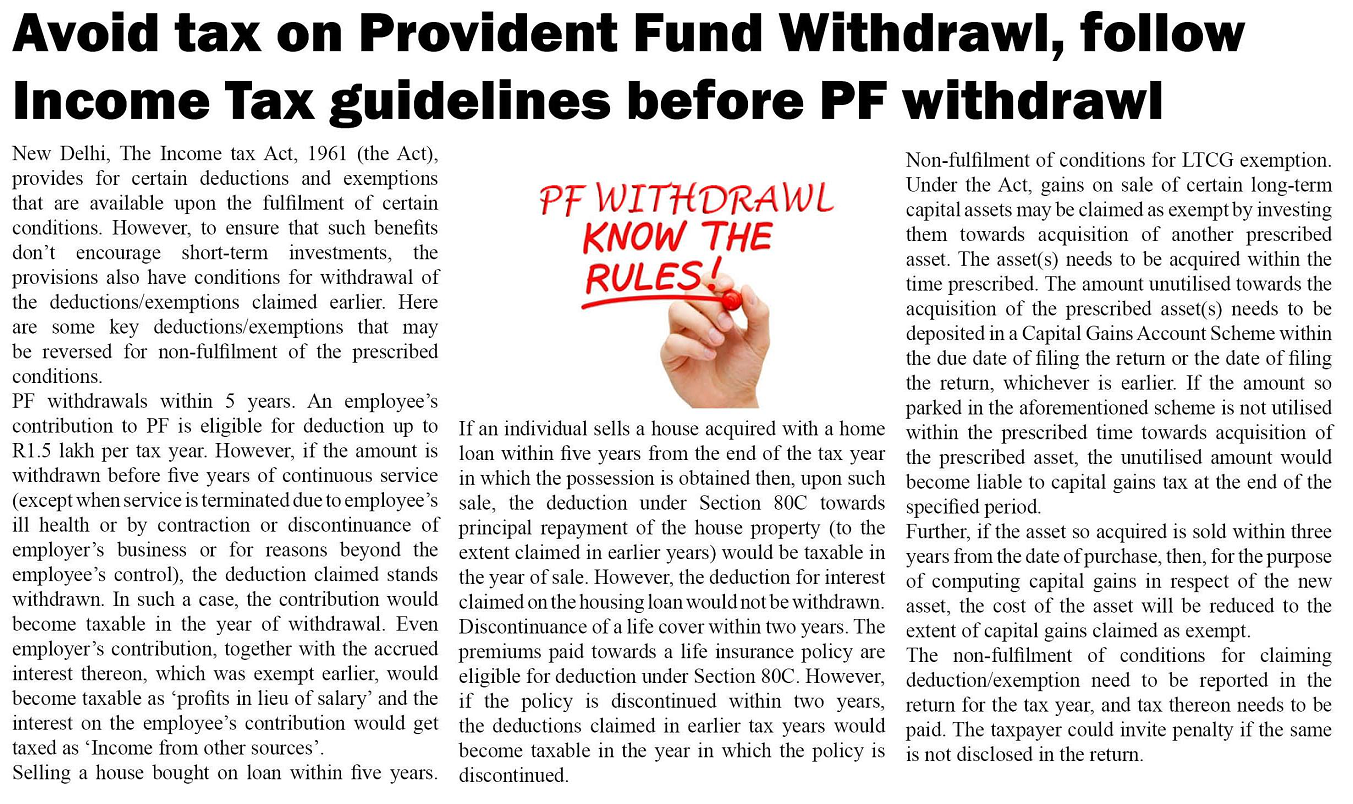