The All India Consumer Price Index for Industrial Workers (CPI-IW) for the month of September, 2017 remained stationary at 285. There is no impact on the calculation of Expected Dearness Allowance from January 2018 for CG Employees and Pensioners.

At centre level, Tiruchirapally, Varanasi, Lucknow, Quilon and Salem reported the maximum decrease of 4 points each followed by Giridih, Bhilwara, Raniganj, Bengaluru, Faridabad, Vishakhapathnam, Jamshedpur and Haldia (3 points each). Among others, 2 points decrease was observed in 12 centres and 1 point in 18 centres. On the contrary, Tripura recorded a maximum increase of 7 points followed by Bhilai (6 points), Siliguri and Doom-Dooma Tinsukia (5 points each). Among others, 4 points increase was observed in 2 centres, 3 points in 2 centres, 2 points in 4 centres and 1 point in 10 centres. Rest of the 13 centres’ indices remained stationary.

The indices of 44 centres are below All-India Index and 33 centres’ indices are above national average. The index of Tiruchirapally centre remained at par with All-India Index. The next issue of CPI-IW for the month of October, 2017 will be released on Thursday, 30th November, 2017. The same will also be available on the office website WWW. labourbureaunew.gov.in. 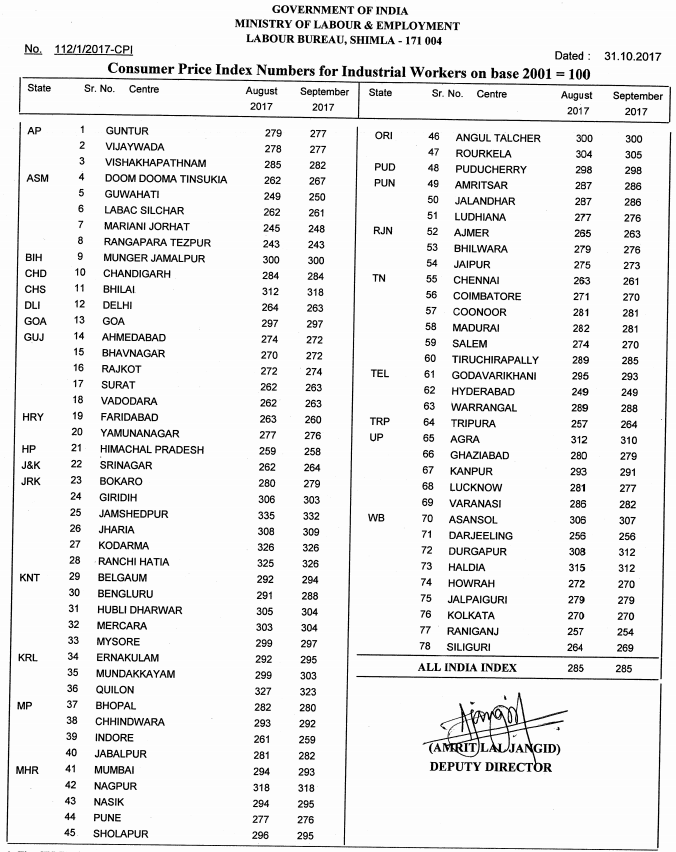