The construct of the Risk and Hardship Matrix, proposed above, is a new paradigm intended to rationalize the myriad allowances, their categories and sub-categories that exist today.

It would make the administration of these allowances simple and provide a framework for the government for future inclusion of any new allowance, which can be placed in the appropriate cell depending upon the severity of the risk and hardship involved.

Siachen Allowance : 7th CPC had placed Siachen Allowance in the RH-Max cell of the R&H Matrix with two slabs of ₹21,000 and ₹31,500. Recognizing the extreme nature of risk and hardship faced by officers / PBORs on continuous basis in Siachen, the Government has decided to further enhance the rates of Siachen Allowance which will now go up from the existing rate from ₹14,000 to ₹30,000 per month for Jawans & JCOs (Level 8 and below) and from ₹21,000 to ₹42,

500 per month for Officers (Level 9 and above). With this enhancement, Siachen Allowance will become more than twice the existing rates.

It will benefit all the soldiers and officers of Indian Army who are posted in Siachen.

The areas under TLA have been classified into three categories and the rates will be governed as per different cells of R&H Matrix and will be in the range of ₹1000 – ₹5300 per month.

The 7th CPC had recommended that TLA will not be admissible with Special Duty Allowance (SDA) payable in North-East, Ladakh and the Islands. Government has decided that employees will be given the option to avail of the benefit of SCRLA at pre-revised rates along with SDA at revised rates.

Rates of High Altitude Allowance granted to Defence Forces and CAPF personnel will be governed by the R&H Matrix. The rates will go up from ₹810 – ₹16800 per month to ₹2700 – ₹25000 per month.

The rates will go up from ₹1200 – ₹12600 per month to ₹6000 – ₹16900 per month. Classification of field areas for this allowance will be done by Ministry of Defence for Defence personnel and by Ministry of Home Affairs for CAPFs.

The rates of Counter Insurgency Ops (CI Ops) Allowance, granted to Defence and CAPFs while deployed in counter – insurgency operations will be governed by the R&H Matrix. The rates will go up from ₹3000 – ₹11700 per month to ₹6000 – ₹16900 per month.

Rates of Commando Battalion for Resolute Action (COBRA) Allowance granted to CRPF personnel deployed in Naxal hit areas will be governed by the R&H Matrix. The rates will go up from ₹8400 – ₹16800 per month to ₹17300 – ₹25000 per month.

Rates of Flying Allowance granted to flying branch and technical officers of Defence Forces will be governed by the R&H Matrix. The rates will go up from ₹10500 – ₹15750 per month to ₹17300 – ₹25000 per month. It has been extended mutatis mutandis to BSF Air Wing also.

The 7th CPC had placed Antarctica Allowance, paid to the Scientists and other members undertaking the expedition to Antarctica under the Indian Antarctic programme, in the RH-Max Cell of the R&H Matrix.

The rates of the RH-Max Cell recommended by the 7th CPC were less than the existing rates of Antarctica Allowance which is currently paid on per day basis. Considering the specific nature of these expeditions and to provide appropriate increase in rates, Government has decided to keep Antarctica Allowance out of the R&H Matrix and the allowance will continue to be paid on per day basis as per existing practice. 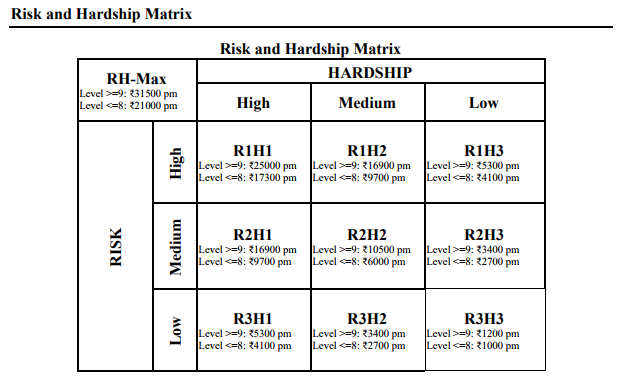