Subject : Fixation of Pay under CCS (RP) Rules 2016: Clarification regarding.

ii) Provided further that in cases where a government has been placed in higher pay or scale between 01.01.2016 and the date of notification of these rules (25.07.2016) on accounts of promotion or up-gradation, the Government servant may elect to switch over to the revised pay structure from the date of such promotion or up-gradation, as the case may be.

3.The relevant detail of the instant case is appended below:

(i) Shri Vinod Anand, IDAS (Retd) was promoted from Junior Time Scale to Senior Time Scale with effect from 03.06.2016. His pay was fixed on his promotion as under:

iii) Department has earlier referred the case to MoD D (Civ) [nodal wing of MoD dealing with pay matters] vide UO Note dated 28.02.2017 (P-9/c) duly supported with orders of pay fixation carried out by Ministry of Home Affairs and UPSC (P-5/C & overleaf). MoD D (Civ) clarified (P-10/C) that the provisions of Rule 5 of CCS (RP) Rules 2016 arc very clear and opined that the pay fixation order of UPSC seems to be correct and in consonance with the provisions mentioned in CCS (RP) Rules. However, MoD D (Civ) also mentioned that in case further clarification is required matter may be referred;: to Ministry of Finance, Department of Expenditure.

(iv) CGDA’s office after having re-examined the case in light the clarification of MOD D(Civ-l) has opined that that a Government servant who has already vacated the post before 01.07.2016 on account of promotion/up-gradation cannot continue in the pre-revised scale up to the date of increment 07/2016 and hence can either elect to switch over to revised pay structure from 01.01.2016 or from the date of such promotion as laid down under Rule 5 of CCS (RP) Rules (P-2/C).

3. Ministry has been requested to take up the matter with Ministry of Finance, Implementation Cell for clarifying whether the pay fixation order as affiluied by MoD(Civ-I)’ can be implemented for regulation of pay fixation under 7th CPC. The case has been sent with the approval of Jt. CGDA.

4.The matter has been examined and it appears that provisions contained in rule 5 of CCS(RPR) Rules, 2016 are not absolutely in agreement with each other since different interpretations have been made by various organizations viz. CGDA and MoD D(Civ.)/UPSC/Ministry of Home Affairs to deal with the cases of pay fixation where individuals granted promotions after 01.01.2016 have opted for benefit of pay fixation with effect from the date of next increment viz. 01.07.2016 in the existing pay structure and then wished to switch over to CCS(RPR) Rules, 2016. In the instant case if the case is strictly regulated in accordance with second proviso to rule 5 of CCS (RP) Rules, 2016, the same puts the individual to a considerable recurring loss in pay fixation as brought out in pa 3(i) & (ii) above. Hence, the matter needs to be examined by the nodal ministry viz. Ministry of Finance, Department of Expenditure for issue of instructions with regard to manner of pay fixation in such cases.

5.In view of the position explained above, if kindly approved we may request Ministry of Finance, Implementation Cell to examine the issue and favour this Ministry with clarification as the matter is not free from doubt in regard to manner of fixation of pay in respect of officials promoted/upgraded during 01.01.2016 till the date of notification viz. 25.07.20.16, who have opted to switch over to CCS(RP) Rules wef date of next increment viz 1.7.2016. 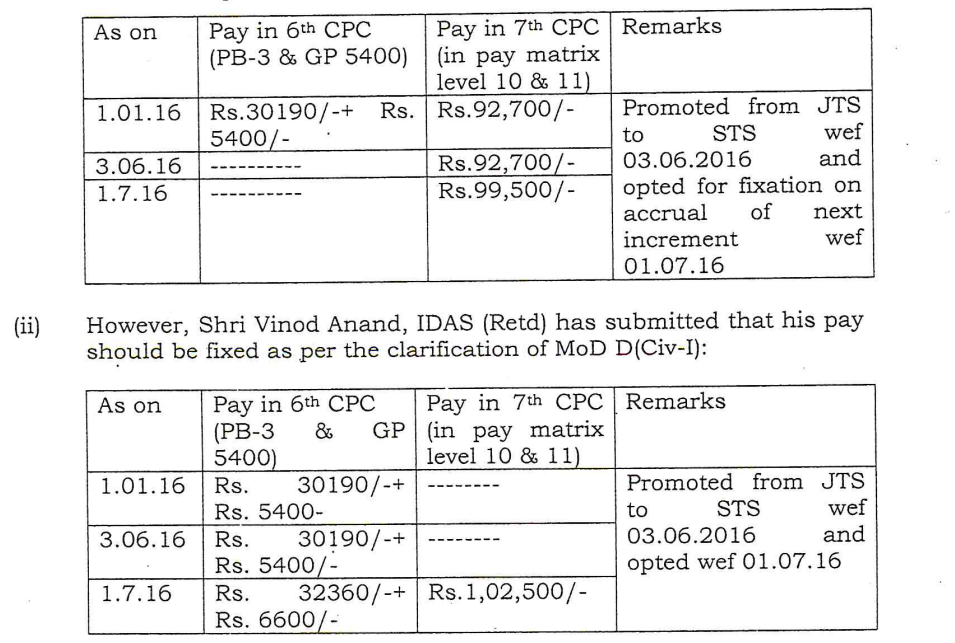