You are here: Home / Dopt Orders / Posting of Husband and Wife at the Same Station – Dopt orders

Posting of Husband and Wife at the Same Station – Dopt order 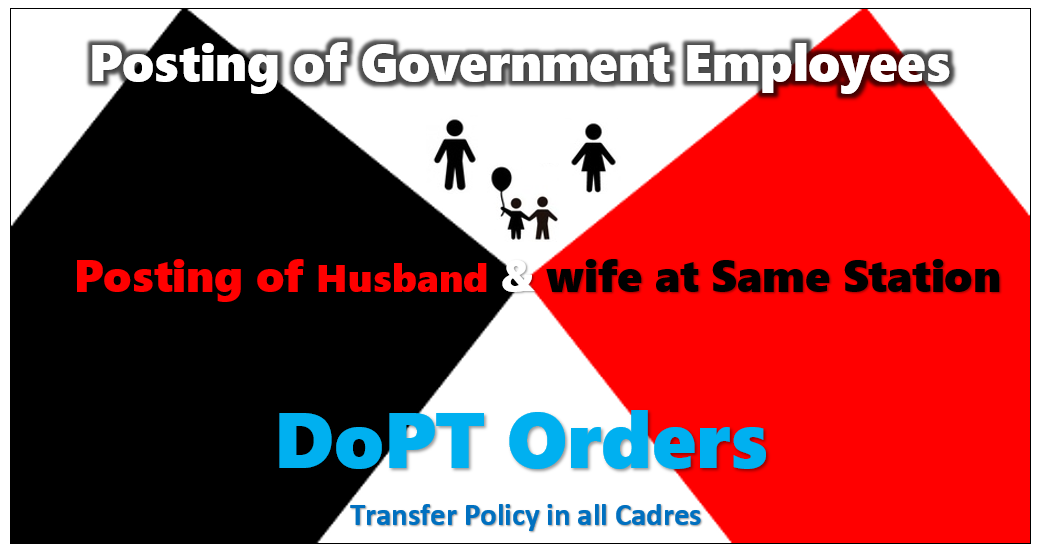 The first order with guidelines issued by the Department of Personnel and Training (DoPT) on 3rd April 1986 regarding the requisition from the spouse for a posting at the same station. [Click to view in detail]

In another order issued on 10.5.1990 by the DoPT regarding the requests from physically handicapped employees for transfer to or near their native places may also be given preference.[Click to view in detail]

In 1991, the Government of India decided to give priority for the parent of a mentally retarded child to transfer or post on sympathetic view on the merits of each case and accommodate such request. [Click to view in detail]

In 1997, after implementation of 5th pay commission, the nodal department of DoPT reiterated to all Ministries/Departments should adhere to the guidelines already issued on 3.4.86. Priority may be given to the applicant’s children below 10 years age, and also instructed that the wife only in Government service may also given same priority to the applicants. [Click to view in detail]

An important clarification order issued by Dopt on 13.3.2002 that the employees in Group A, B, C and D seeks transfer to or near their native places due to physically handicapped may also consider. [Click to view in detail]

On the basis of the 6th CPC Report, Govt. servants have already been allowed the facility of Child Care Leave which is admissible till the children attain 18 years of age. On similar lines, provisions of O.M. dated 12.6.97 have been amended. [Click to view in detail]

Dopt issued orders on 13/06/2014 regarding the implementation of Supreme Court Judgement dated 31.10.2013 in WP Civil No 82/2011 in the matter of Shri TSR Subramanian and Other vs UOI and Others – Hundred days action plan of the Department. [Click to read in detail]

Updated on 2nd July 2015 on the title of framing a transfer policy in all cadres. The guidelines on tenures, postings on promotion, posting on return from leave/deputation, outstation postings, mutual transfer etc. Appropriate provisions on these aspects may be made in the Rotational Transfer Policy in each cadre that will best serve public interest. [Click to view in detail]

We have made a table of orders for your kind consideration…

The affected employees feel that although the all guidelines for implementing the facility issued by the Government, the Head of Departments are not feasible to make it clear to stricken employees.

Concerning the posting at the same place of husband and wife who are working in Government service, the transfer issues have been raised in Parliament on several occasions.

In 1980’s these demands began to show its seriousness, because the percentage of women employees were increased in joining the Government services.

The Central Government also observed this issue from various forums, a circular had been issued by the Department of Social Welfare in Feb 1976 to all Head of Departments to give serious consideration to the requests of posting of husband and wife at the same station. In order to that order, lot of women employees started to send their request to transfer at the place where their husbands are posted.

The Central Government gave its utmost importance to this issue and as far as possible and within the constraints of administrative feasibility, the husband and wife should be posted at the same station to enable them to lead a normal family life and to ensure the education and welfare of their children.

The Department of Personnel and Training issued an OM on 3.4.86, in accordance with the guidelines and instructions in the order given by the Government, all cadre controlling authorities should consider such requests with the utmost sympathy.

The Department of Personnel and Training issued various office memorandums regarding this matter from time to time.

The motive of the Government on the petitioners, said in the orders repeatedly, to give utmost importance attached to the enhancement of women’s status in all walks of life and to enable them to lead a normal family life as also to ensure the education and welfare of the children.

Till recently, the Department of Personnel and Training has issued total of six orders pertaining the above subject on its website. After implementation of the 6th CPC, the last order has been issued on 30.09.2009.

The order said that “On the basis of the 6th CPC report, Government servants have already been allowed the facility of Child Care Leave which is admissible till the children attain 18 years of age”.

The consolidated guidelines concerned this subject has been provided in the OM dated 12.06.1997.

The consolidated guidelines has been amended and published in the last order after implementation of 6th CPC.

In the main guidelines, ”The husband & wife, if working in the same Department and if the required level of post is available, should invariably be posted together in order to enable them to lead a normal family life and look after the welfare of their children especially till the children attain 18 years of age.

This will not apply on appointment under the central Staffing Scheme. Where only wife is a Govt. servant, the above concessions would be applicable to the Govt. servant.

Complaints are sometimes received that even if posts are available in the station of posting of the spouse, the administrative authorities do not accommodate the employees citing administrative reasons.

In all such cases, the cadre controlling authority should strive to post the employee at the station of the spouse and in case of inability to do so, specific reasons, therefor, may be communicated to the employee”.