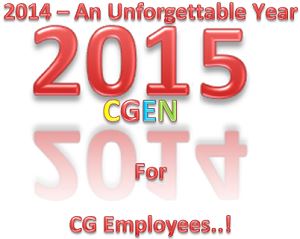 2014 was a year of expectations, disappointments, and trials and tribulations for Central Government Employees and Pensioners too.

The year began with a collective decision of all employees federations to go on a strike demanding, among other things, 50% DA merger, and date of effect of the 7th CPC.

When it became clear that there was going to be a change of government at the Centre, the federations began to plan their moves in order to somehow convince the Congress Government to accept their demands.

At last, the Confederation alone held protests on February 10 and 11. Other federations announced that they want to resolve the issue by holding talks and withdrew their strike plans. But the Central Government remained unmoved.

A huge rumour started that in a desperate attempt to secure votes, the party at the Centre would be more than willing to raise the retirement age from 60 to 62. Despite a number of questions that were raised in the Parliament, and clarifications that were given for it, the topic somehow never quite died away. At least once every year, the issue makes headlines and vanishes.

All the employees federations and associations, including the National Council – JCM, presented separate memorandums to the 7th Pay Commission listing their demands and expectations. Of particular interest was the ‘Expected Pay Structure‘, which described how the new pay package should be.

Since there were earlier news that the new income tax limit would likely be raised to Rs. 5 lakhs, a lot was expected from Arun Jaitley. But, he raised the income tax limit to Rs. 2.5 lakhs and the 80C limits to Rs. 1.5 Lakhs.

A lot of buzz was created when news appeared that 6-day work week was going to be soon implemented, particularly in Delhi circle.

The popular air travel LTC facility was extended by another two years in September. In addition to J&K and NER, the facility now covers Andaman and Nicobar Islands too.

Orders were issued to clean up the country under the ‘Swachh Bharat’ mission. Since the movement was going to be launched on October 2, the birth anniversary of Mahatma Gandhi, the national holiday was cancelled.

entral Government employees were asked to submit information about their assets and debts to the government.

In November, the Central Government made arrangements to issue Aadhaar Card-based ‘Digital Life Certificates’ for pensioners.

Fear and tension prevailed among Central Government employees when announcements appeared that the Centre was actually planning to reduce the retirement age. The Government then denied such plans.