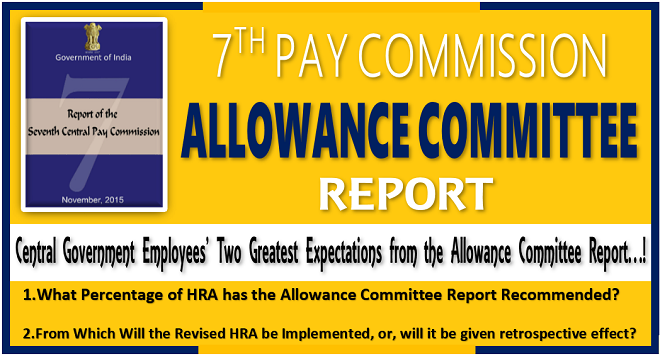 “Answers have not yet been found for the two big questions that are troubling the Central Government employees over the Allowance Committee report.

Reports continue to pour in that the committee on allowances constituted under the chairmanship of Finance Secretary Ashok Lavasa is all set to submit its revision report on the recommendations given by the Seventh Pay Commission on the allowances that are being given to the Central Government employees.

There are no confirmed reports of the exact date on which the report would be submitted. The information available now come from unconfirmed and unauthorized sources. The news media claimed that the NJCA leaders were going to meet Finance Secretary Ashok Lavasa today. The federation has not yet given any confirmed information.

Nearly 50 percent of the salary increment has not yet been given to the Central Government employees. Only the Basic Pay have been revised; all the other allowances, including the HRA, continue to remain the same and are being calculated as per the 6th CPC.

The Central Government had, on 25.07.2016, published authorized Notification declaring that the recommendations of the Seventh Pay Commission are going to be implemented. Only the revised pay is being given from August onwards. Only the salary arrears are due from January 01.01.2016 onwards are being issued.

House Rent Allowance (HRA) is a very important allowance being given to Central Government employees. For the past 10 years, HRA for Central Government employees is being calculated on the basis of the population of the town or city where they are employed. The towns and cities are classified as X, Y, and Z, based on the population, and a HRA of 30, 20, and 10 percent respectively are given to them. The Seventh Pay Commission had reduced it to 24, 16, and eight percent.

Normally, the allowances are calculated from the day when the new Pay Commission recommendations get implemented.

Here are the answers to the two questions that keep troubling the Central Government employees:

1. What percentage of HRA has the Allowance Committee report recommended?
2. From which will the revised HRA be implemented, or, will it be given retrospective effect?