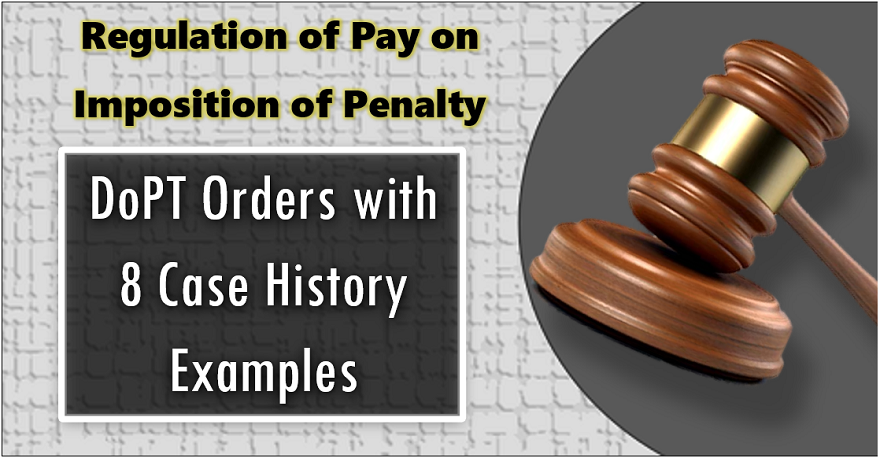 Subject: Regulation of pay on imposition of a penalty under CCS (CCA) Rules, 1965.

The Undersigned is directed to say that the following penalties prescribed in the Rule 11 of CCS (CCA) Rules, 1965, have a bearing on the pay of the officer:

(iii)(a) reduction to a lower stage in the time-scale of pay by one stage for a period not exceeding three years, without cumulative effect and not adversely affecting his pension.

(iv) withholding of increments of pay;

(v) save as provided for in clause (iii) (a), reduction to a lower stage in the time-scale of pay for a specified period, with further directions as to whether or not the Government servant will earn increments of pay during the period of such reduction and whether on the expiry of such period, the reduction will or will not have the effect of postponing the future increments of his pay

2. Vide Central Civil Services (Revised Pay) Rules, 2016 notified vide notification No. GSR 721(E) dated 25.07.2016, the present system of Pay Bands and Grade Pays have been dispensed with end a new system of pay matrix as specified under Part A of Schedule of Central Civil Service (Revised Pay) Rules, 2016 have been introduced. The status of the employee so far determined by Grade Pay, will now be determined by Level in the Pay Matrix. Further, as per Rule 10 (1) of the CCS (Revised Pay) Rules, 2016, there are two dates for grant of increment namely, 1st January and 1st July of every year, instead of the existing date of 1st July.

3. As per clause 3 of the Central Civil Services (Revised Pay) Rules, 2016 ‘Level’ is defined as under:
‘Level’ in the Pay Matrix shall mean the Level corresponding to the existing Pay Band and Grade pay or Scale specified in Part A of the Schedule.”

4. in the light of Implementation of the Revised (Pay) Rules, 2016, the regulation of pay on imposition of these penalties, is discussed in the subsequent paras:

On imposition of a penalty under this Rule, the pay would be fixed at the next upper vertical cell in the same level in the pay matrix. In other words, in case of reduction by one stage, the revised pay would be the pay drawn in the same level at the stage before the last increment.
Note: The above mentioned penalty cannot be imposed on a Government Servant drawing pay at the minimum of the Level.

B. Withholding of increment {Rule 11(iv)}

As already noted in para 2 above, increment is granted either on 1st January or 1St July of every year, as per the eligibility. Therefore, on imposition of penalty of withholding of increment, the next increment(s) due after the date of imposition of the penalty would be withheld. In case where penalty of withholding of multiple increments is imposed, increments due on 1st January or 1st July, as the case may be, in the subsequent years would similarly be withheld. The increment would be restored at the end of the period for which the penalty is imposed. The increments will be given on notional basis without arrears and without affecting date of next increment on restoration of increment.

C. Reduction to a lower stage in the time-scale of pay for a specified period [Rule 11(v)]

The process of imposition of penalty of reduction by one stage under Rule 11(iii a) explained above shall be repeated for every additional stage of reduction to the lower vertical cell in the same level of pay in the Pay Matrix.

Note 1: It is not permissible to impose a penalty under this rule if the pay after imposition of the penalty would fall below the first cell of the same Level.

Note 2: Disciplinary Authority may weigh all factors before deciding upon the quantum of penalty i.e. the number of stage by which the pay is to be reduced.

D. Reduction to lower time-scale of pay under Rule 11(vi)

However, Disciplinary Authority has the power, in terms of FR 28, to indicate the pay which the Government servant on whom a penalty of reduction in rank has been imposed. would draw.

It may also be noted that a Government servant cannot be reduced in rank to a post not held earlier by him in the cadre.

(i) A direct recruit Assistant Section Officer cannot be reduced to the lower rank like SSA/JSA.

5. Some illustrations on pay fixation on the above cases are annexed.

6. In so far as the personnel serving in Indian Audit and Accounts Department are concerned, these instructions are being issued after consultation with the Comptroller and Auditor General of India.

sd/-
(Satish Kumar)
Under Secretary to the Govt. of India