You are here: Home / Cabinet Committee / Announcement on DA from July 2019: Why getting delay?

Announcement on DA from July 2019: Why getting delay?

All Central Government employees and Pensioners including Defence and Railways expecting the announcement of additional Dearness allowance due from July 2019. 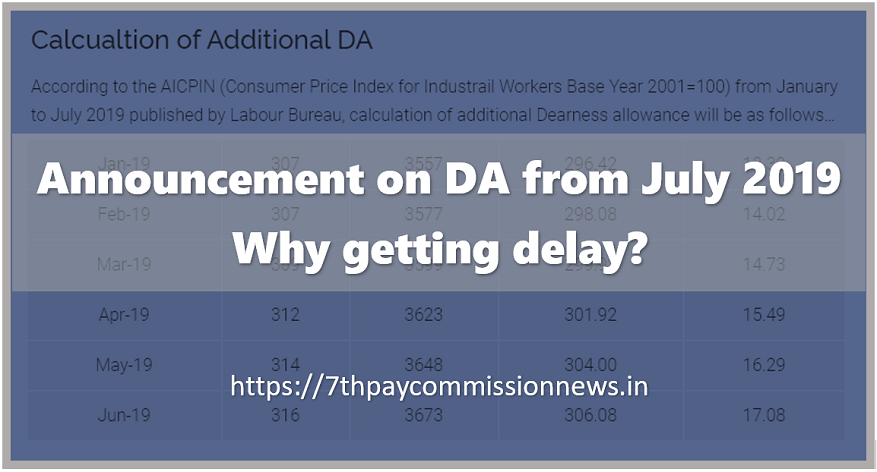 In regular practice, DA announcement will be in the month of March and September. The 2nd installment of additional DA from July 2019 may be declared today!

According to the AICPIN (Consumer Price Index for Industrial Workers Base Year 2001=100) from January to July 2019 published by Labour Bureau, calculation of additional Dearness Allowance will be as follows…

As per the recommendations of 7th pay commission, additional DA and DR from July 2019 may be enhanced by 5% from the existing rate of 12%.

All pre procedures are completed from the department side and finally Cabinet Cabinet will decide on the agenda item of hike in Dearness Allowance for Central Government employees and pensioners due from July 2019.

Usually, DA hike will be declared after Cabinet Committee approval in the first or second week of March and September. After approval of Cabinet Committee, Finance Ministry will issue formal orders for payment of Dearness allowance to all eligible employees with arrears for two months.

Hence, this is last week of September and Centre is likely to declare 5% DA hike today!