The Commission has estimated the minimum pay (the calculations for which have been tabulated in the Annexure) through the following steps:

Step 1: The food, clothing and detergent products listed and their respective quantities specified by the 15th ILC have been adopted. These quantities indicate the monthly consumption of the listed products by a family comprising three consumption units.

Step 2: The quantities have been multiplied by their respective product prices to arrive at product wise cost.

[At monthly family consumption of 7.2 kg the Commission has estimated the monthly expenditure on Dal at ₹704.44 after calculating the price of Dal at ₹97.84 per kg. The price of Dal has been calculated as the average of prices of Toor, Urad and Moong Dal items specified under the product Dal and whose prices have been determined at ₹87.86, ₹109.66 and ₹96.00 respectively.

The prices of these three Dal items are the twelve monthly average prices for the period July, 2014–June, 2015.] The prices of all items have been sourced from Labor Bureau, Shimla.

Step 3: The cost of food, clothing and detergent products obtained from Step 2 has been divided by 0.8 to arrive at a total, of which 20 percent provides for fuel and lighting expenses.

Step 4 : The cost estimated from Step 3 is divided by 0.85 to arrive at a total, of which 15 percent is towards recreation, ceremonies and festivities.

The prescribed provision of  25 percent to cover education, recreation, ceremonies, festivals and medical expenses has been moderated to 15 percent because expenses on educational and medical necessities are being separately provided for through relevant allowances and facilities and thus need not be provided here.

This partially addresses the first of the two components outside the 15th ILC norms.

Step 5 : The cost estimated from Step 4 is increased by 25 percent to account for the skill factor, following the reasoning that there is no unskilled staff in the government after the merger of Group D staff in Group `C’.

This addresses the second of the two components outside the 15th ILC norms.

Step 6 : The cost estimated from Step 5 is divided by 0.97 to arrive at a total, of which 3 percent provides for housing expenses.

This is done in view of the observation that license fees for government accommodation is about 3 percent of the total pay.

This addresses the fourth component stated under para 3 but partially so, as the 15th ILC norms had fixed the housing provision at 7.5 percent.

The DA is assumed to be 125 percent as on 1 January, 2016, the day from which the Commission expects its recommendations to be implemented by the government. Accordingly the cost estimated from Step 6 has been increased by 3 percent (2.25/2.19 = 1.027 or nearly 3%). 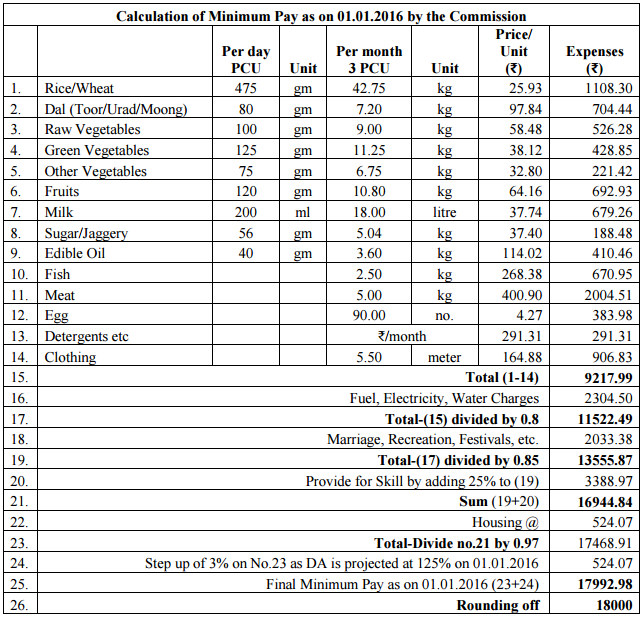