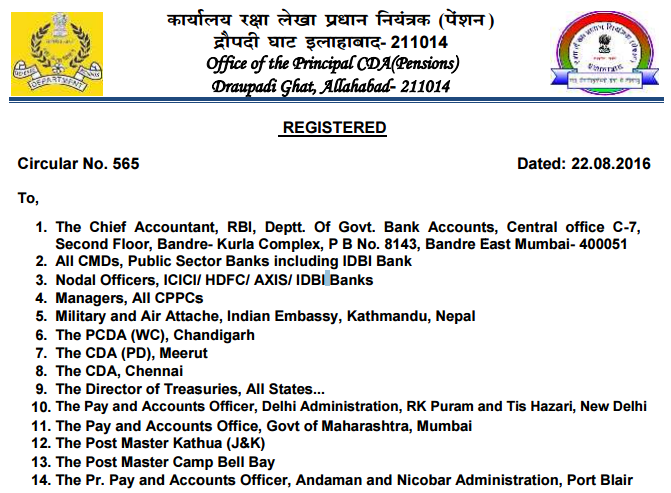 2. As per Para-5 of ibid Govt. letter, the aggregate of Service Element (revised in terms of Para 2.1 of GOl, MoD letter No.16(6)2008(1)/D (Pension/Policy) dated 04.05.2009 circulated vide Circular No.410 dated 13.05.2009 and War Injury Element as amended from time to time, shall not exceed the minimum of the fitment table for the rank in the revised pay structure issued for implementation of recommendations of 6th CPC introduced from 01.01.2006 corresponding to the pre-revised pay Scale held by the Armed Forces personnel at the time of retirement/discharge/Invalidation.

This ceiling of aggregate of War Injury Pension (service Element plus War Injury Element) with reference to minimum of fitment table in the revised pay structure applicable from 01.01.2006 as mentioned above shall stand removed with effect from 01.07.2009 vide Gol, MoD letter No.10(01)/D(Pen/Pol)2009/Vol.II dated 19.01.2010.

4. Accordingly, to facilitate the PDA’s for the revision of War Injury Pension,Corrigendum PPO was considered to be necessary. Annexure attached with Circular No.560 dated 08.06.2016 in all such affected cases was called for with certain information.

Now, considering the hardship to the Ex-Servicemen located in remote areas, it has been decided that the requirement of Annexure to the Circular No.560 for revision will be done by the PDAs on the basis of minimum of fitment table attached herewith. No corrigendum PPO will be issued by this office in this regard.

5. For revision of War injury pension, minimum fitment table has been enclosed as annexure ‘A’ to ‘F’ and PDAs are authorized for revision of pension within the Cap (i.e aggregate of Service Element and War Injury Element to revised amount till 30.06.2009.

6. It is also mentioned that vie this office circular No.560 dated 08.06.2016 cited under reference, rates/tables for modified parity of Special/Liberalized Family pension and Disability/War Injury Element for various ranks was already prepared and Circulated. In the said circular, there is no table for Hony. Naik, Hony. Havildar and Havildar granted Hony. rank of Nb Subedar.

In view of above, it is hereby clarified that since Hony. Rank of Naik, Havildar and Havildar holding Hony rank of Nb Sub are drawing pay in the pay scale of Sepoy, Naik and Havildar respectively, therefore, they are entitled for modified parity with reference to substantive rank held at the time of retirement/ discharge/invalidment except Naik (TS) who draws the pay of Naik. Therefore, Naik (TS) should be entitled for modified parity with respect to Naik rank.

7. All the Public Sector Banks disbursing defence pension would render a monthl progress report to the office of the PCDA(P) Allahabad as per the Proforma attached as APPENDIX- ‘Y’ (both for ICOs and JCOs/ ORs). All PDAs are therefore,requested to ensure rendition of the said monthly report both in hard and soft copy (Excel Format) by name to Shri S. Basumatary, Sr. Accounts Offcer (P) (Audit Co-ordination) on e-mail ID: [email protected] by 15th of the following month. It is also enjoined upon that all the columns of APPENDIX- ‘Y’ must be filled in complete and correct manner.

It is also requested that one more copy of the requisite APPENDIX- ‘Y’ may invariably be sent along with the pension payment scrolls in which arrears of pension will be shown.

8. The DPDOs will render the said monthly progress report in APPENDIX- ‘Y’ to the office of the PCDA (P) Allahabad as well as respective CDAs i.e. CDA (PD) Meerut and CDA Chennai as the case may be.

9. A copy of arrear sheet shall invariably be provided to the concerned pensioner by the PDAs for information.

12. This circular has been uploaded on this office website www.pcdapension.nic.in for dissemination of Defence pensioners and Pension Disbursing Agencies.

Click to view the Revised Pay Structure of ARMY (PBOR)

Click to view the Revised Pay Structure of NAVY (PBOR)