You are here: Home / One Rank One Pension / DELAY IN THE IMPLEMENTATION OF ONE RANK ONE PENSION (OROP) – IESM LETTER TO Sh RAJEEV CHANDRASEKHAR 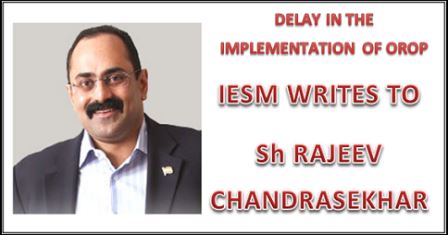 DELAY IN THE IMPLEMENTATION OF ONE RANK ONE PENSION (OROP)

You have been leading the fight for Defence Personnel both serving and ex-servicemen (ESM) inside and outside of Parliament and with every Government. ESM have appreciated your gesture of not accepting increased pay and perks of MP since last two years and your resolve that you will not accept the pay raise and perks till Government grants OROP for ex-servicemen.

IESM on behalf of ESM family thanks you for your unstinted support. OROP, one of the crucial demands of ESM, is close to approval. OROP has the approval of two Parliaments, all political parties and has been approved twice in the budget. Yet OROP notification has not been issued since last one year. The reason for this undue delay in issuing the notification is a common knowledge that Bureaucracy is not happy to give OROP to Armed Forces and veterans. The work on draft GL and the tables will start only after the approval of OROP by the Government. Raksha Mantri has extended full support to OROP and is personally monitoring the progress of the file.

This undue delay in issuance of notification is not good for morale of Ex-servicemen. They have started getting doubts on the Government’s resolve to give OROP. Government has missed three deadlines given to veterans for issuance of GL. Parliament session is about to start and Government will get busy in running the session and notification for OROP will get relegated to yet another date. IESM requests you and your friends to raise pertinent questions which will nail the Government to fixed dead line and Government is not permitted to give stereotype reply on OROP. Some of the questions which come to our mind are

Government has been giving stereotype reply since last three Parliament sessions that OROP is under consideration and will be given as and when it is formalized. Please give firm date for issuance of notification. Ambiguity on such an important demand of Armed Forces is having adverse impact on their morale.

As per principle of OROP a senior rank officer/JCO/OR will not be paid pension less than his junior. Will this aspect be the adhered to and OROP notification will include suitable safe guard for this?

Honorable courts have given many decisions in favor of Defence Personnel. Some of them have been complied with and only litigants have been given the benefits of court decision. Will GL include all decisions given by courts in favor of Defence Personnel whether litigants or not. This will ensure equal justice for all affected ESM and will also save Court’s time and Government’s time. It may be noted that non litigants if not included in GL will definitely move the courts and will get decision in their favor from AFT/High court /Supreme Court.

There are only very few Major rank officers who are drawing pension. Most of them are very senior and 75 and above. This group of officers needs sympathetic consideration as they had all put in service of more 20 years. This group needs to be given Lt Col basic pension with Major’s grade pay, since after 2004 officers with 13 years service one eligible for the rank of Lt Col . Most of them are pre – 96 retired. Government had denied giving them Lt Col pension. One Major Thomas pre 96 retiree has won the case and has been awarded Lt Col Pension. Lt Col pension with Major’s grade pay needs to be given to all Majors pre 96 or post 96 retiree. This will again save Government time on litigations by Majors.

Status of National War Memorial. When will the work start on it and when will nation pay homage to fallen soldier at the National Memorial?

Status of Ex-Servicemen Commission. Government to confirm that it will be headed and manned by Ex-servicemen and will have statutory powers to order Government departments for delay in actions.

Sh Rajeev ji, ESM are getting restive because of this undue delay and shifting of goal post on one pretext or other. IESM is worried that some of the local organizations may get disturbed and may deviate from the non-violent path of IESM and may resort to Rasta Roko or Rail Roko agitations. It will not be good for country and ESM. May I therefore request you to kindly meet PM/RM and confirm the latest position and issue a statement to sooth the nerves of the agitated ESM.

I am sure we will see some of the questions being raised in Lok Sabha and Rajya Sabha on the suggested lines in the coming session.

I will be grateful to get a reply giving plan of action and your advice for future course of action.